Acts 1:8, “But you will receive power when the Holy Spirit has come upon you, and you will be my witnesses in Jerusalem and in all Judea and Samaria, and to the end of the earth”

When Jesus spoke these words he did so with an intention that the disciples would not become complacent in just reaching those in their direct community, but actively would be reaching people outside their comfort zone. The second geographical region in which Jesus asked his disciples to be his witnesses was Judea and Samaria. In the Bible, Judea encompassed the city of Jerusalem and the immediate surrounding territory. Samaria, on the other hand was much different. It was established as the capital of the Northern Kingdom during the divided kingdom, but by the time Jesus’ earthly ministry began Samaria represented a people who were culturally, racially, and religiously different. 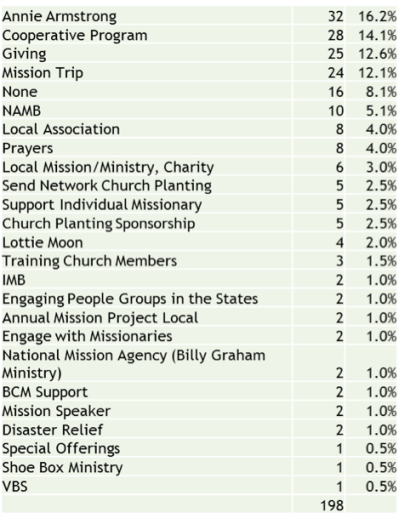 For the American church this region represents people who are outside our city, outside our state, and also those outside our culture. For those of us involved in smaller membership churches reaching our diverse nation for Christ may seem like a daunting task, but it is not. Dr. Jeffrey Farmer of the Caskey Center for Church Excellence, recently conducted a survey that showed what some of the Caskey Center churches are doing to reach the nation with the Gospel. The most predominate way these churches supported national missions was by giving funds through avenues such as the Annie Armstrong Easter Offering (16.2%), the Cooperative Program (14.1%), and through miscellaneous giving (12.6%). The second way that smaller membership churches are involving themselves in national missions is by going on mission trips (12.1%).

There are many examples of how Caskey churches are becoming involved in national missions. One Caskey Center pastor explained how they have strategically incorporated prayer into their church, “Every single week we have a part of our worship service that we pray for a different NAMB church planter and chaplain for the military. We use pictures provided by the NAMB website.” Another pastor described how his church has become involved in supporting church plants, “We financially support two families of church planters in Montana and New York. We took a team last summer to Montana to physically help that family.” These are a couple examples of how churches are reaching their Judea, but in order for your church to reach their Samaria it must be sensitive to reaching those who are culturally different in their own community. One such example of a church reaching people unlike the demographic of the church was a church that started an intentional Bible study to reach gang members in the neighborhood.

The call to reach our nation is one that must begin now. So here are three practical ways that your church can begin being intentional with national missions: